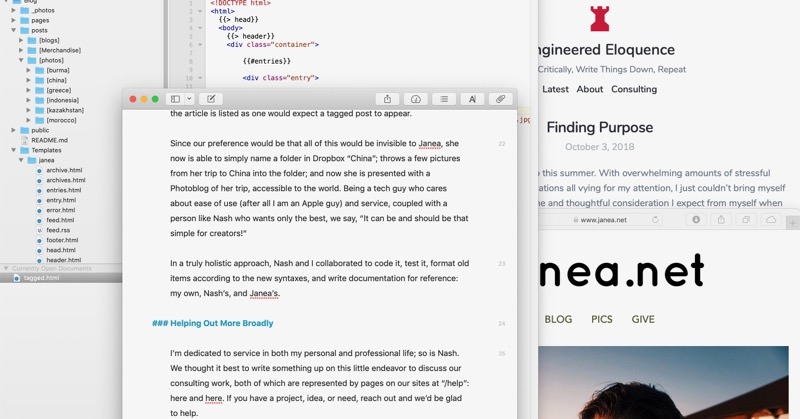 Nash’s Note: I used to think it was weird to have online-only friends (someone that I met online, and I talk to regularly, but never met in the real world), but that’s completely changed over the last few years. As a creator, I’m able to reach people all around the world, and that’s the coolest thing about this guest post. Meet Jay Ray: someone that somehow found my blog and subscribed to the newsletter. He would frequently respond to those monthly emails, and then I’d reply to his feedback. Slowly, we’ve become friends that talk on a consistent basis about the process of building. All the behind-the-scenes stuff that is too nerdy to speak to the average person about.

Lately, the conversations have been about three things:

I built Janea’s site about a year ago, but Janea and I were both too busy to actually finish it at that time. Now, she’s currently in Cambodia — Her first blog post, about a Cambodian kid named Hong, shows exactly why she needed a blog. It was so powerful. — and recently reached out to me to finally launch the blog. She was ready to make it public. I decide to delegate a lot of those tasks to Jay Ray, who was excited to help complete the project.

In this guest post, you’ll notice a bunch of things happening together, collectively showing the beauty of creativity and teamwork. The success of my newsletter shows how you can build connections by shooting words out into subscriber’s inboxes. Eventually, people respond, and sometimes, bigger things happen. Like this.

He uses Blot, the same blogging engine that I use (and now Janea uses). In this post, he breaks down all the little details about what makes Blot so easy and powerful. Our project, Janea.net, shows its importance: a little blog for someone that doesn’t have time to blog. Her site, both in how it looks and how to actually add stuff to it, is as simple as you can possibly get, without losing structure and polish.

And last but not least, by working on these projects, Jay is back to writing and slowly getting out of his slump. We all have those moments where we need a spark to get going again, and I’m glad he’s found it.

I went through a bit of a slump this summer. With overwhelming amounts of stressful work, family, and personal situations all vying for my attention, I just couldn’t bring myself to write without the proper time and thoughtful consideration I expect from myself when writing for the site. I even took my site down for a time due to how full my brain felt.

When I say slump, I mean I was unable to find motivation to do much of anything. My wife assures me I did not show this feeling outward, but I scaled back a lot of the things I generally considered fun. At home, cooking became a chore, housework became anathema, and I generally didn’t want to do anything that required energy. At work, whether I was working on a coding project, working on a committee, or pursuing professional development, I was unmotivated to do more than the bare minimum.

In my overwhelmed state, I more generally felt a loss of purpose and I only recently came to grips with what I was feeling and how to combat it. As I stated in my post about responsibility, I normally feel passion and desire to help others, especially when I have a voice as a white person in the United States of 2018. Said more bluntly: what right do I have to have a slump at all?

I honestly have no idea how or when I first heard about nashp.com, but I ended up following him on Twitter, reading his Blog, and subscribing to his email newsletter. One such newsletter caught my attention in August of 2017:

That’s what this change here is. I’m writing you directly. This isn’t automated, and this isn’t for my website. I’m writing straight to you. The goal is to build relationships with the people that are interested. The cool thing is, all you have to do is reply to this message, and a conversation is started. You can simply say hello, or we can discuss a certain topic that I wrote about. Or I can help you with a project that you’re working on. Just let me know.

I love this. I wish there was enough time in the day to convert all those nascent Twitter follows and likes into something more real. I recently deleted Twitter from my phone because of just that feeling. I was watching more and participating less. I’m now trying to use my Blot-hosted blog as a space to write short but meaningful thoughts and automate my posts to social media to better prioritize real connections where I can. I’d love to hear your thoughts. Thanks for trying something different.

This started something: an OMG-has-it-already-been-a-year back and forth that has led to one of the closest online-only relationships I have ever had. Nash and I have the commonalities of a desire to share, a desire to connect, and a desire to serve. He and a few others helped me realize that I was putting too much pressure on myself, even with just the name of my site; his words: “Keep it..rebrand it to just your name..and there’s nothing eloquent..it’s just you”. I have had the site name for so long, I can’t just get rid of it, but his point struck me and stands.

I decided my slump had to end and in a big way, so I’ve started to write and share again, but I’ve also started to help others with their own stuff.

Being the son of a pastor and a lifelong teacher, I was raised in a service mentality. My sister went into social work and community organizing; I went into service-focused technology with particular passion for libraries and higher education. I married a teacher with a passion for minority and underrepresented populations. In other words, we have a desire to help in each of our focus areas and we are service-oriented.

I sometimes wondered if I went into the wrong industry. Due to the digital divide and my passion for access, the technology landscape is at direct odds at times with my sensibilities. But a passion is a passion and every area needs compassionate, empathetic people to steer toward a better future.

Similarly, I never thought of my website as a place where I could reach out to those who needed assistance or better yet where they could find the information in order to reach out to me. So my day job was helping people with technology and my site was separate; it seems silly now to think I would keep my site separated from something I am passionate about. For whatever reason, I was never sure how much detail people wanted in my niche community about what it takes to code my site and sites like it. Nash debunked that theory.

Helping Out With Blot

This site runs on Blot. I tell you this since it is a commonality between my site, Nash’s, and others for whom this story matters. I don’t generally consider myself a programmer, but I understand code just like any other person who spends enough time around it and similar puzzles; as an aside, at some point I will have to stop this line of thinking since a person who programs as often as I do is probably considered a programmer. One way I see myself helping others is in sussing out code problems and giving advice about design and approaches to technology. Long story short, I have helped Nash with a few things and want to help others in the same way.

Short story long, Blot uses the Mustache templating engine to render pages. The nicest thing about it is the simplicity it can provide for those who want a blog that just works, while providing the flexibility that other templating engines have without the excessive learning curves. Blot also has a number of nice touches to complete the simplicity chain, such as folder-based post tagging and automation capabilities that come by way of its use of Dropbox as a file server.

For janea.net, Nash and I set out to provide a dead simple way for the purveyor to post folders of pictures and render them as photoblogs. In addition, we looked at her site as a blank slate. With the information she provided, what could we do to make the site both usable for her ministry, but also useful for those who wanted to stay connected to her. This was the short list for the initial launch: simplistic navigation, automated email newsletters (and dead simple signup process for it), a place for her words, a place for her pictures, and a place for her donation campaigns and handmade merchandise.

For instance, Blot’s tagging system allows Janea to create a folder within her hierarchy called “[china]”. By default, Blot has the ability to use a page that points to specific tags, in this case janea.net/tagged/china. Using the templating engine, I was able to make it so that if given the proper combination of tags, the tagged “posts” (in this case the photos themselves) are listed. If not given the proper set of tags, the name of the article is listed as one would expect a tagged post to appear.

Since our preference would be that all of this would be invisible to Janea, she now is able to simply name a folder in Dropbox “China”; throw a few pictures from her trip to China into the folder; and be presented with a Photoblog of her trip, accessible to the world. Being a tech guy who cares about ease of use (after all I am an Apple guy) and service, coupled with a person like Nash who wants only the best, we say, “It can be and should be that simple for creators!”

In a truly holistic approach, Nash and I collaborated to code it, test it, format old items according to the new syntaxes, and write documentation for reference: my own, Nash’s, and Janea’s.

I’m dedicated to service in both my personal and professional life; so is Nash. We thought it best to write something up on this little endeavor to discuss our consulting work, both of which are represented by pages on our sites at “/help”: here and here. If you have a project, idea, or need, reach out and we’d be glad to help.