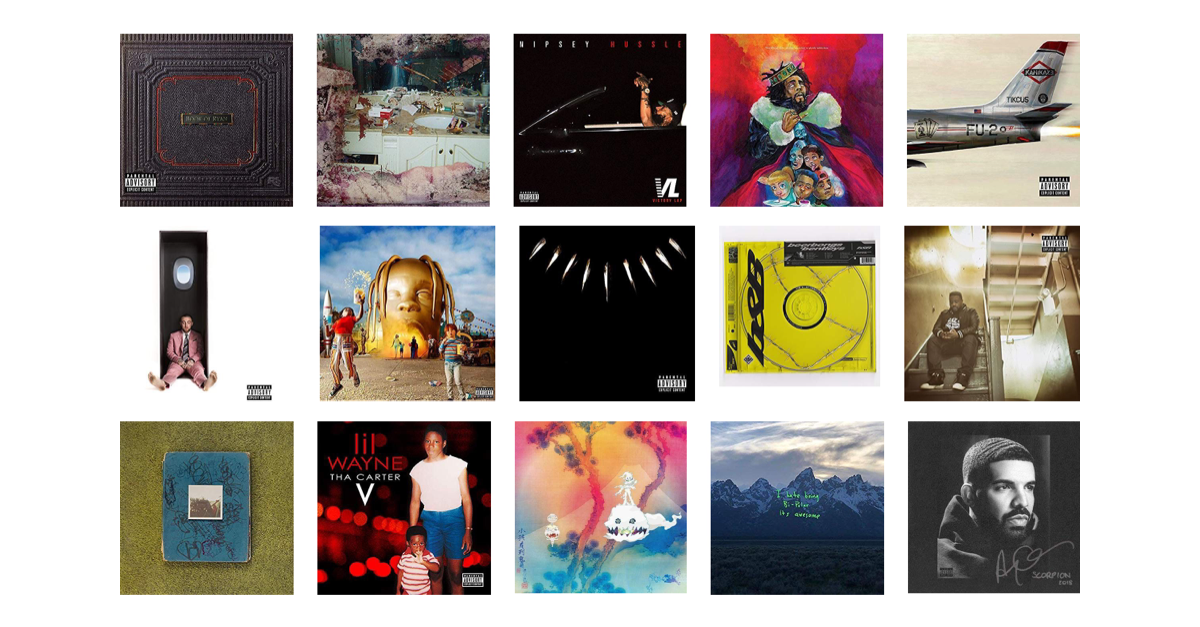 It’s been a good year for music. There’s so much to love about the amount of albums that were released. No matter what style you like, there’s something here for you.

Royce tells a layered story to about his life, it’s two paralleled stories while talking to his son (one about his dad, and one about himself) mixed with some of the best wordplay I’ve heard in a long time.

Pusha T accomplishes in 7 songs what most artist struggle to do in 20. His album is short, but has a big sound.

Nipsey delivers a motivating album some would confuse with a street album. When I hear this album, I hear ambition, and focus, and conquering goals.

J. Cole created some of his best and most diverse material on KOD (here’s my review on the album). It’s melodic and contemporary, while still giving a deeper message. I’ll look back at 2018 as the year Cole raised his talents and technical skills up to an even higher level.

Eminem finally gave me an album without all the extra pop songs to sell an album (here’s my review on the album). When I think of Kamikaze, it reminds of the mixtape days, and this is how an Eminem mixtape would sound.

Even though these albums aren’t in my top 5, I actually listen to them a lot more. Mac Miller released, what sounds like, a farewell album. That alone, from the intro, leaves me in awe. Knowing that he died soon after releasing this, makes this a bit of a sad album, but that doesn’t take away from the level of quality that’s left behind.

Travis Scott has one of my go to albums when I start my car. From beginning to end, the sound is captivating.

Black Panther is a soundtrack, but it’s all originals from Kendrick and TDE. It came out at the very beginning of 2018, so it’s now forgotten about, but the quality of this soundtrack is better than most albums released this year.

Post Malone’s is another album that I put on in the car, or when I’m ready to listen to something upbeat, and I have it on rotation a lot. The way he uses autotune fascinates me. When he uses it, it’s like he’s singing through a fan. The melodies of his hooks are my favorite out of all the albums mentioned here.

Phonte released his album early this year, so it’s overlooked now by time, but I’ve always been a fan of his, back when he was 1/2 of Little Brother, and to hear him now on a full length solo LP was everything I thought it’d be. He’s a very underrated artist, that always sounds so comfortable on the mic.

Black Thought has the potential to be ranked first on any rap list at any moment, but what he released this year, was two EP’s, and although they’re pure quality, they don’t have much cohesiveness. They’re more like a handful of songs thrown together. Those songs are some of the best lyrical songs of the year, though, and should not be missed.

Lil’ Wayne’s Carter V is most likely his best album. It’s his most thoughtful and vulnerable. What hurts this album is the length of it, and how many filler tracks are on there. Cutting this album in half would’ve helped.

Kids See Ghosts is a beautiful little album. It’s more of a Cudi album that features Kanye, and that’s a good thing.

Kanye delivered 6 really good songs, that I continue to listen to over and over (here’s my review on the album). But when I think of this album, I’m exhausted by his public persona. He’s tarnishing his legacy with his impulsive antics. This little album has a lot to enjoy, though.

Drake’s album has the same problem that Wayne’s album has: it’s too long (here’s my review on the album). Cutting it in half would’ve easily moved it up on the list.