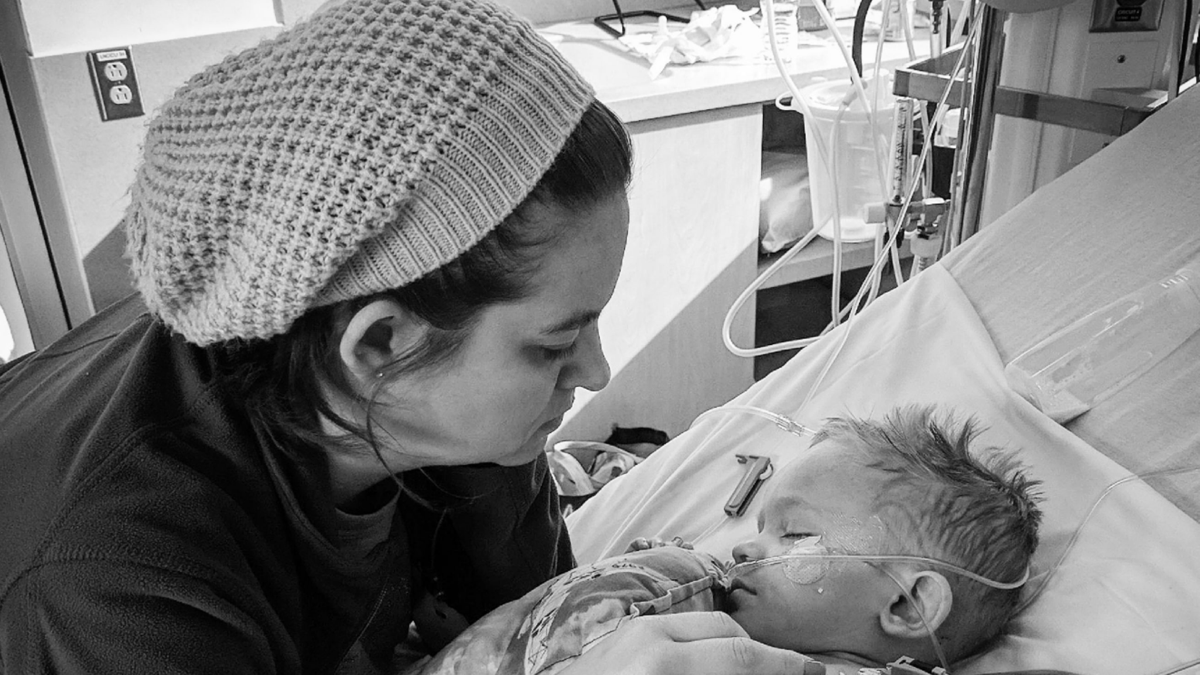 Nash’s Note: I’ve known Nicole and her family for over four years now, but mostly because of their son, Jude, who’s constantly facing heart complications and surgeries. We’re always rooting for little Jude, but this story allows me to look closer, at the entire family, and more specifically, Nicole. The life-threatening battle that baby Jude continues to fight is constantly on my mind, but this look behind the curtain helps me understand that the battle goes much deeper than just his little heart. Nicole tells a story that’s filled with anxiety, depression, and several other medical conditions. And still, through all of what they’ve been through, and continue to go through, it’s their faith that keeps them going. This guest post explains it all for us.

Hello, my name is Nicole Neal, and I am honored to be writing a guest post. I think what Nash is doing is amazing. I came across his work on Facebook, and just knew I wanted to be a part of it. I feel my story has value and I’m glad I can share it here.

As Long As I Can Remember

I’ve struggled with anxiety and depression for as long as I can remember. I come from a childhood background of abuse and abandonment, which led me to teenage/young adult years of using alcohol, drugs, and promiscuity as coping mechanisms and self-medication. I jumped from one bad relationship to another. Collecting shame and pain as a trophy from every single one. I went to court-appointed counseling and was recommended to use an antidepressant medication. Looking back, I do see that it helped. I would stop using it to drink alcohol though. It wasn’t my most shining moment.

In 2007, I met my husband, started a family and finally started going to church again. In 2012, we had our daughter. About three months later, when I had a raging meltdown, I thought I may have postpartum depression, so I saw my doctor. Come to find out, it was actually a condition called PMDD (Pre-Menstrual Dysphoric Disorder) which, in a nutshell, is very severe PMS (Pre-Menstrual Syndrome). I want to stop here and say it is real, it is crippling, and it is wise to seek God, counseling, and medicine for this disorder. It caused my already present, but well-hidden, anxiety and depression to kick into high gear. It’s a hormonal imbalance that effects your body and brain. It is now actually considered a mental illness. So I started taking antidepressants again; this time, staying on them. They most definitely have helped.

In 2014. Now married with one biological daughter, my husband got promoted in his job and we moved to Houma, LA. It was an exciting time that ended up being the best, yet hardest thing we had ever done at the time. We had been in Houma for about 5 months, not going to church, but drinking again, because we were lonely and bored (to be honest). It ended up exploding into something ugly that year, in August, and decisions were made. Either go back home (Lake Charles) or we find a church. Church won, thank God! And it was, of course, Cross Church at the AMC Theater.

By that November, we found out we were having another child. It was devastating for a few hours. We were not prepared nor trying to have more kids. Depression started to settle in again. I’ll be transparent and tell you why. See, coming from an abusive background, I had never actually wanted children. And for Dad, he already had three of his own. God had pricked our hearts when we decided for our daughter, but that’s all we wanted. Plus we had my two stepdaughters, who lived out of town. Eventually, the depression subsided and things looked up. Cross Church and its people were our saving grace. They had no clue how much more they would help us in the coming future.

In August of 2015, our son was born. That’s when our lives were forever changed. Long story short, he was born with four heart defects that required emergency open heart surgery. Then we found out he had a very rare genetic disorder that was chronic and incurable. All of a sudden we were thrust into the world of special needs parenting a medically-complex child. That has definitely been the hardest, but most rewarding thing I’ve ever done. But also with it, comes. (yep, you guessed it) ANXIETY and DEPRESSION. Anxiety from being scared your child can die at any moment, from having to constantly be on guard and watchful for signs of distress. This has caused PTSD in myself, his dad, and his sister. Granted, anyone can die at any time, but this is a completely different ball game. You have to be in our shoes or close proximity to fully understand. Depression sets in when you feel there’s absolutely nothing you can do to help your child when they are suffering. Medications & surgeries are awesome but only go so far. Depression comes when you’re always in and out of hospitals and doctors’ offices, instead of on family vacations or celebrating holidays. It comes from rarely having time to care for yourself or have time for other siblings or spouse. It’s EXHAUSTING. And those are just a few examples.

Now, unfortunately, I also have several more disorders that bring on that depression as well: PMDD, Hashimoto’s disease (autoimmune disorder that attacks the Thyroid where hormones are regulated), adrenal dysfunction and adult ADHD. If I let it, I can fall into that proverbial pit of despair.

A wise woman once told me that, even as Christians, we should still utilize every option that God gives us to assist in overcoming trauma, abuse, etc., including depression. I now see a Christian counselor and take supplements and medications to help. I take advantage of EVERY church small group that encourages me and helps me deal. I don’t hesitate to ask for help, even when the enemy tells me that I’m being selfish and a burden. I also reach out to those in similar situations. Because I personally know how much it means to have someone in your corner.

I just want to finish with this. I know what the diagnosis says, but I also know what God says. He says his word is NEVER changing. He says He will never leave me nor forsake me. He says I am called for such a time as this. So even at my weakest, I can feel his strength surrounding me.

Luke 13:12 “When Jesus saw her, he called her forward and said to her, ‘Woman, you are set free from your infirmity’.”

Psalm 71:20 “Though you have made me see troubles, many and bitter, you will restore my life again; from the depths of the earth you will again bring me up.”